The Kentucky Symphony Orchestra lights up the fuse on the occasion of its 30th anniversary season on October 16.

Cassidy remembers, “After the brochure came out, I got a call from a gentleman from Erlanger who asked me how I got his name. I replied with a quick line on a demographic study, and he said, “That’s good, but this brochure was sent to my dog.”

I then replied, “I bet your dog eats Iams pet food.” Sending 3,000 seasonal brochures to pets was an inauspicious way to launch a new symphony orchestra, but 29 years later, the KSO (fka Northern Kentucky Symphony) still presents some of the most engaging and unique programs in the country. .

For its 30th season, the KSO returns to auditoriums, a cathedral and a former streetcar depot in four cities (Erlanger, Cincinnati, Highland Heights and Newport) in Boone, Hamilton and Campbell counties.

Like last season, concerts will be offered in person and live for $ 35 per single ticket or $ 150 for all five concerts. The KSO will adopt each respective venue’s security protocols that are in place at the time of the performance. 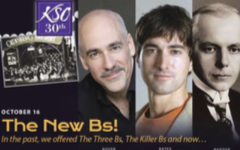 The KSO literally deceives, fuse and dance to open its 30th season.

This entirely orchestral program does not present the Three B’s (Bach, Beethoven and Brahms) but the New B’s (Boyer, Bates and Bartok). Peter Boyer’s “New Beginnings” (2000) opens with a rousing fanfare that gives way to a haunting lyrical melody and a quick, noisy finale. Grammy-winning composer and DJ, Mason Bates, brings his samplings and computer-controlled tempo and percussion sounds to his 2018 work, The Art of War, with sounds from the US Treasury printing presses, a mix of American blues and Iraqi folk music; and the formation of a United States Marine Corps Mortar Platoon. The program ends with the 20th c. by Béla Bartók. battle horse – Concerto for orchestra (1945).

Cathedral Basilica of St. Peter in the Chains, (Cincinnati) 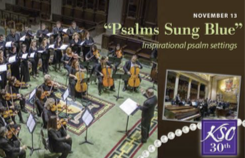 Collaborating with the Choir of the Basilica-Cathedral of Saint-Pierre-aux-Chains and its director Matthew Geerlings is always an edifying artistic treat for musicians and the public. The Psalms of King David have long inspired composers over the centuries. George Frideric Handel’s Dixit Dominus (Psalm 110) was written in Italy when Handel was 22, and demonstrates his mastery of counterpoint, melodic invention and dramatic gesture. The piece is a choral tour de force and is considered one of Handel’s finest works. Alexander Zemlinsky’s Fantastic Style Frame from the popular Psalm 23 (The Lord is my Shepherd) is a chromatic painting of the pastoral setting with God as a Shepherd. The last Book of Psalms (No. 150), enjoins everyone to praise God with music and dance. Catholic devotee Anton Bruckner closes the program with his uplifting psalm of praise, power and glory. 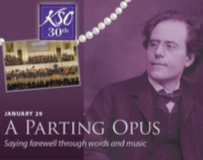 The KSO returns to the location of its very first concert in 1992 – Greaves Concert Hall (NKU) – for the last complete composition of Gustav Mahler – his Symphony No. 9. It is a poignant musical farewell written by one of the first international master composers who bridged the 19th to 20th centuries and extended the symphonic form to its limits. The recent loss of her 7-year-old daughter and her own diagnosis of fatal heart disease have undoubtedly influenced Mahler’s thoughtful and highly regarded work. The KSO has offered American Poets Laureate commissions to write poetry inspired by Mahler’s 9th Symphony. As a reflective summary of their own lives and works, these original poems will be juxtaposed with the KSO’s interpretation of Mahler’s separation opus. 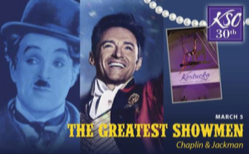 British comic actor, writer, director, composer Charlie Chaplin (1889-1977) has become one of the biggest Hollywood stars of the silent movie era. Chaplin’s trademark character, “The Tramp,” incorporated pantomimes and original movements to create an iconic figure who appeared in most of his films from 1914 to 1936. The KSO will screen his 1928 film The Circus, then that he performed Chaplin’s revised score in 1967 (restored for a live performance by Timothy Brock). After an intermission, the KSO turn to portraying PT Barnum’s Hugh Jackman in the 2017 film – The Greatest Showman. Composers Benj Pasek and Justin Paul wrote the music for the film and the popular tunes “This Is It”, “From Now On” and others, for which KSO and a local cast will present several selections in this old and new program. musical / theatrical. . 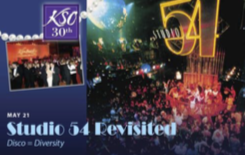 Last year, when the KSO was frantically searching for a location for its season finale, it stumbled upon the Newport Car Barn – the old depot (built in the 1890s) for electric streetcars. While in the process of being refurbished into a unique event space, the KSO thought it would be a “slammin” location for a 30th season concert / dance and finale / party. Forty-five years ago an era of popular music was born, it was a truly unifying force, bringing all races, ages and genres together to just share a good time. This music was of course known as Disco. These highly produced and heavily orchestrated songs have brought everyone to dance floors in clubs around the world. Studio 54 was the exclusive New York club that has become synonymous with nightclubs, celebrities, and other associations. The KSO authentically performs the charts of Abba, Barry White, The Village People, Vicki Sue Robinson, Kool & the Gang and many more with its studio orchestra and singers amid mirrored balls, lights and nostalgia. Don’t miss the tri-state’s only symphonic dance night.

For 30 seasons, the KSO has differentiated itself from more traditional orchestral offerings through its unique thematic presentations and its mission to make symphonic music and the concert experience attractive, accessible and affordable.

Tickets for each show this year remain where they have been for several years at $ 35 to experience great musicians, guest artists and innovative programming unique to our region.

For those who need to stay at home, the KSO continues to live stream every concert (with multiple cameras) for your “home access” for the price of one ticket. Subscribers to all five shows receive preferred seating, flexible usage, and access to live broadcasts in person with a savings of $ 25. Tickets are available online at kyso.org or by phone at (859) 431-6216.